His buildings, including his private residence, have become tourist attractions. His works are often cited as being among the most important works of contemporary architecture in the 2010 World Architecture Survey, which led Vanity Fair to label him as “the most important architect of our age”.

﻿I have only recently discovered the work of Frank Gehry due to this blog….each design is amazing and almost look un-realistic! The Walt Disney Concert hall is my favourite as I love the unusual design and the way the building looks different from every angle. 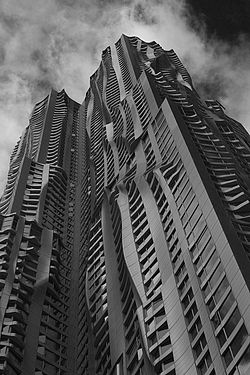 8 Spruce Street (formerly the Beekman Tower) is a 76-story skyscraper designed by architect Frank Gehry currently under construction in the New York City borough of Manhattan at 8 Spruce Street, just south of City Hall Plaza and the Brooklyn Bridge.

Frank Gehry is also the first architect to ever appear on The Simpsons. (Unfortunately I was not able to locate the English version!)